X is for Kisses

Day 27 of Beccy's Month of Holiday Cards is the dreaded letter X. The most obvious would be Xmas but I rarely use that term as Christ needs to be in Christmas. So I usually go in a different direction. 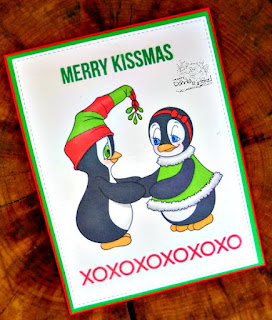 This image is from Beccy's Place called Finn and Molly. It was perfect for my X card with the mistletoe on his hat. I have an retired stamp set from Simon Says Stamps called Big Holiday Wishes that has a stamp of the X and Os on my card. It also has the sentiment that I used. I cut the image panel with MFT Blueprints 13 die. It has a stitched edge around the panel. I am entering these challenges:


Arthur's X word is ziyophone (xylophone); at least that's what it sounds like. Arthur and Valerie are on break from Head Start this week so we took them for a chuck of the day to give their parents some time to themselves. Since the rain hadn't arrived yet and it was in the 50s, we decided to go to the playground for a while. After that we had lunch at Culver's Restaurant where the kid's meals included frozen yogurt. So I'll leave you today with pictures of Valerie and Arthur eating their ice cream. My husband texted these picture to the while family with the caption: "Ice cream so good you need two spoons." Have a blessed day. Thanks for stopping by. 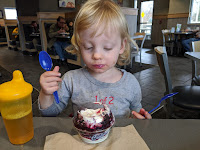 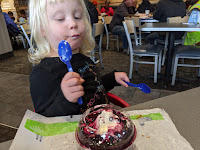 What cute photos Donna! They both have eyes only for their ice cream! So cute. I love the extra spoon they're each holding, it's always a good idea to have a backup when it comes to dessert.
Your card is very sweet. The sentiment works very well with the image. Love the X's and O's stamp you added along the bottom of the card. Well done!
Cheers,
Beccy

A great card - thanks for sharing it with us at Christmas Crafts All Year Round.

So cute!!! Thanks so much for participating in our CHRISTMAS CRAFTS ALL YEAR ‘ROUND challenge. Hope you participate in our next challenge!! Have a happy crafty day!!! *Sorry so late commenting! I’ve had a busy couple of months!
Deanne at A Little Bit O’ Paper