Just a quick note to thank all those who sent hugs to me today. We dropped our son at the airport and of course I tried even though Steve told me not to. Because he thought he would start. Right now he's over the Atlantic Ocean headed for Frankfurt, Germany. I'm praying for his safe arrival. Thanks so all of you who are sending prayers for him too. I have a project almost ready to post so I'll be back tomorrow night with a new card! Hope you have a wonderful Thursday!
Posted by Donna at 10:22 PM 3 comments:

Tonight I am getting ready to blubber my way through tomorrow as I send my youngest to Austria to start his new job. He'll be in Austria for three months and when he returns he'll be moving to Charlotte, NC.  So I know I'll have a tough time at the airport tomorrow. Please say a prayer for Steve that he makes it safely to Austria and adjusts to a new life.

My card tonight is to wish Flourishes a very Happy Birthday. They are celebrating their 4th birthday as a wonderful stamp company. 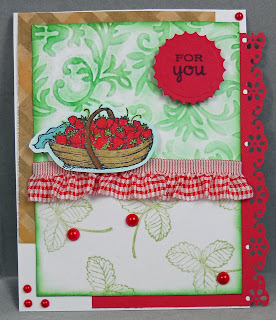 I used my favorite Flourishes set called Strawberries. I used the Victoria embossing folder and a Martha Stewart border punch. I love the little gingham skirting and I added the red self-adhesive beads to simulate little strawberries. The images and sentiment are from Strawberries stamp set. Thanks to Flourishes for 4 years of amazing stamps. By the way this is my favorite Flourishes set because it reminds me of my middle child, Dan. He loves strawberries and he used to sneak them all the time whenever I or mt Mom were cleaning them. One time my Mom (now smiling on me from heaven) smacked him with a form when he tried to steal a strawberry. One of those cute little memories that remind me of Mom, Dan and strawberries!

I'm taking tomorrow off of work to be with Steve so maybe I'll get a little time to craft. See you back for my next entry. Have a wonderful Wednesday!

Happy Monday! A couple weeks ago I won a lunch from a local restaurant. It just wasn't lunch for me but for five of my friends too. We went to lunch last Thursday and had a wonderful time. We could order anything we wanted. The food was great; the service was wonderful! So I wanted to make a special thank you card for the people at the restaurant. 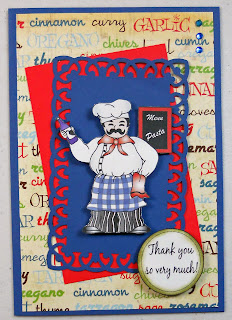 The image is the Italian Chef from Happileigh. It was one of the images I won on Outlawz Challenge blog.  The background paper is from JoAnne's. I punched the edges with the Martha Stewart French Scroll punch around the page punch. 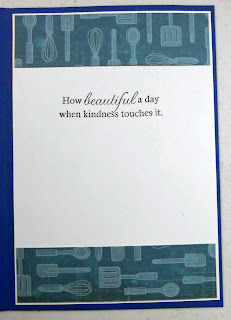 Here's the inside of the card. I was pleased with this one. I am entering this card in these challenges:
Thanks for stopping by today! Hope your week is off to a wonderful start and the rest of the week is great!

My second post for tonight. To see my other card please scroll down. I really like the way this card turned out. I am sending this card to mt friend Coralie from the Yahoo group Making Greeting Cards. The idea was to make a trifold card. 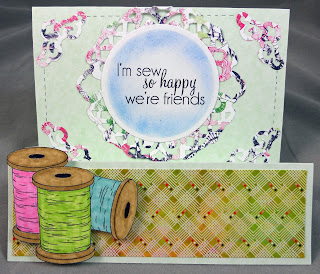 I didn't get a really good picture of how this card is folded but I hope you get the idea. The image and sentiment are from Clear Dollar Stamps. The background papers are from Basic Grey June Bug and Paper Studio. I used Spellbinders Lattice Pendent dies to cut background paper.

The challenges I am entering:
Thanks for stopping by. Have a wonderful rest of your week!

Very hot and humid today. I am very bust at work. The new school year begins next Monday at the university and our Enrollment Coordinator left her job last week so her position falls back on to me in addition to the work I am already doing. Yikes! So work can be the pits right now and I am so ready to leave at 5pm. This weekend my in-laws will be here and stay the weekend at Baby Creek with us. Looking forward to seeing them again. 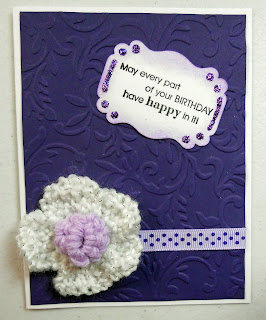 The embossing is the Victoria Cuttelbug folder, one of my favorites! The sentiment is from a Stampin' Up! set. I added the ribbon and a flower I crocheted while I was in Salt Lake City.

I'm also entering this card into a few other challenges:
Thanks for stopping by. Hope the end of your week is spectacular.

I'm not sure that I am crazy about my card tonight. I saw a similar card on Kristen Werner's blog but I think I like her card much better. Teehee! Here's my thank you card for the DYSU challenge. 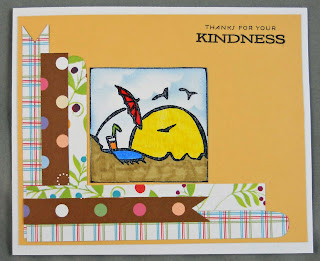 The image is a stamp that my son Dan gave me when he visited a while ago. I love the beach scene. I used scrap pieces of paper to outline. Pretty simple card.
Thanks for stopping by. I have a couple more projects that I've been working on so come back soon. Have a wonderful hump day!

Happy Hump Day! We are more than halfway through the week. So glad. I am ready for another vacation. LOL! Work has been hectic this week. We have a special someone from work who just received a heart transplant. Bless the person and their family who donated the heart. We wanted to send a card to our friend and wish him well. So here's the card I made. 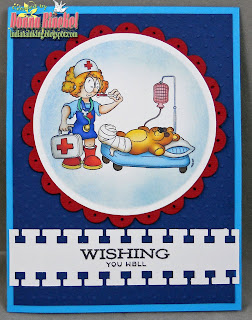 The image is from Just Inklined. It was a colored image so I didn't color this one. I love colored images. It makes it fast and easy to whip a card you need right away. I used Spellbinders and punches to finish off the rest of the card.  I used the Wednesday Sketch Challenge from Outlawz. I am also entering this one in Do You Stack Up for using embossing. The background color is embossed with the Swiss Dots embossing folder. That's it for today. I am heading back to my desk because I also need a thank you card. If I could only make them faster than I use them. LOL! Have a marvelous Thursday!

Labels: Do You Stack Up?, Just Inklined, Outlawz challenge

Happy Tuesday! Back from Salt Lake City and looking forward to our next trip to Austria. Our son, Steve, leaves September 1st for Austria. We are hoping to go visit him later this fall.

My card tonight is so cute. I like the way it turned out. 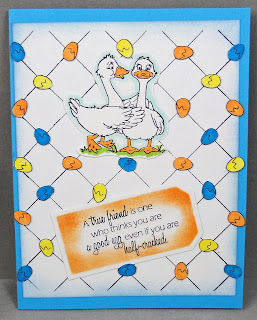 I used several stamps from Clear Dollar Stamps. The images are colored with Copics and Bic Mark-It markers.

I am entering this card into several challenges:
Hope you have a wonderful week. I'll be back with more this week I hope.

I am away from crafting this week, visiting my son, Dan, in Salt Lake City. So I thought I would show you a few of the things we've been doing. Yesterday Dan had to go to work, so Tom and I went to the Mormon Tabernacle area to see an organ concert. Here is the hall where the concert was held and the pipe organ that was played. There are over 7,700 pipes in this organ. 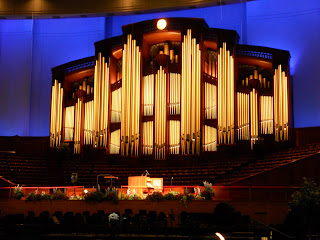 After the concert a very nice woman from Idaho gave us a tour of the concert hall building. She travels every week from Idaho to volunteer her time on Mondays in the Mormon hall. Our favorite spot was the roof. On top of the hall is four and a half acres of garden filled with plants that are indigenous to Utah. It was just amazing. 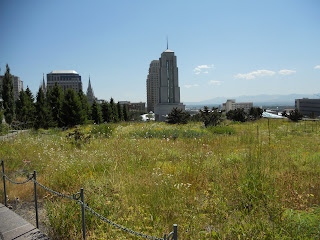 Can you believe this is on top of a building. She said they brought in special "light" soil so that it wouldn't be too heavy for the roof.

Today we took a drive since Dan didn't have to work. We first drove to Antelope Island, which is the biggest island in the Great Salt Lake. We did see an antelope. He's a bit difficult to see but he's in the middle of the picture. 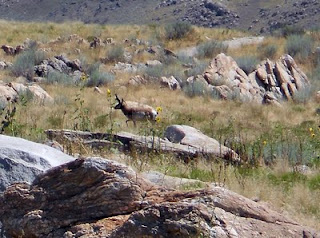 One last picture for today. There are about 600 bison on Antelope Island. We saw whole herds of them but while we were hiking Tom shot this picture of a bison very close to where we were hiking through. 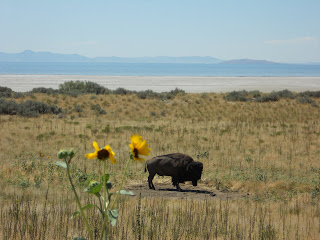 We also saw a moose today but he ran too fast for us to get his picture. Guess he was camera shy. LOL! This must have been out animal day today. I'll try to add more pictures later this week. Hope everyone is having a great week. 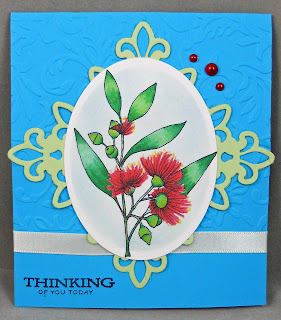 Happy Thursday! Another card for your tonight. This has to be a record for me this week. The image was a wonderful free image from Beccy's Place. I used the Fleur de Lis Spellbinder for the backing of the image and embossed the card with the Victoria embossing folder. A little ribbon and a sentiment added.

Tomorrow is my favorite day of the week (well really after 5pm). Wishing you all a wonderful weekend!

It's not often that I get two cards completed in one night. And besides the two cards I swept our house and peeled and sauced a bunch of tomatoes for the freezer. But it is about bed time for me. LOL! So here's my cards. 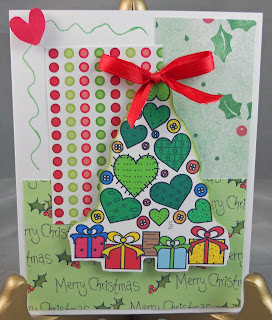 The image is a digi that I won form Happileigh Scrappin this week. Love this tree heart image. I added a few embellishments: the heart to mimc the hearts in the trees and the bow to the top of the tree. I'm entering this card in these challenges:

My second card is a birthday card in a color scheme that I don;t often use. 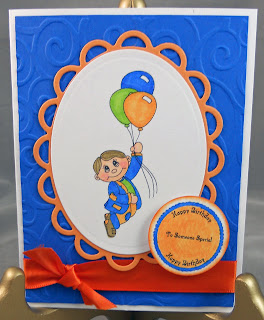 I don't very often use orange in my cards, except for Halloween but U think this turned out cute. The image is Up and Away from Digital Delights. The embossing is D'vine Swirls. The challenge that I am entering with this card is:
Outlawz Monday challenge: Must use a balloon and sentiment

Thanks for stopping by today. Hope you found some inspiration. Take care and have a wonderful Thursday!

I have two cards for you tonight. I needed a birthday and an anniversary card so I found these very cute cards at Sherlock's Home blog and changed them to suit my needs. 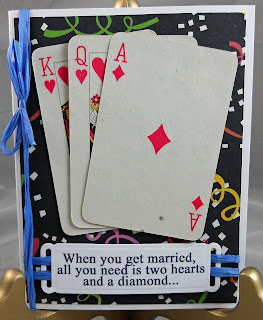 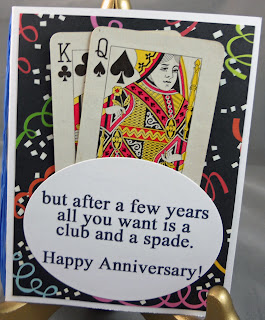 Happy Anniversary! I am entering this card into Mark's Finest Papers Speedy the Cat's Friends challenge: use twine or jute, etc; anything but ribbon.

For my second card I also used playing cards. 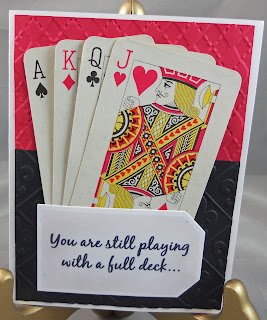 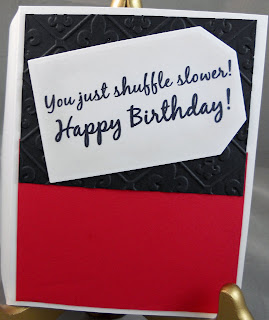 And that's  the birthday card. What fun to use an old deck of cards.

Had a wonderful but hot weekend with my in-laws out at Baby Creek. I didn't get much time to craft but watching birds was wonderful. I saw lots of hummingbirds, golden finches and even a red headed woodpecker. Too cool! Have a wonderful week.