Happy weekend! It's been such a busy week that I've gotten a little behind on Beccy's Month of Holiday Cards challenge. But I am determined today to get caught up and maybe a bit ahead as we have the twins again all day tomorrow. Plus I have a few other cards that need to be done for some other projects. When Tom asked me this morning what I was going to do today I said, "I'm making cards and you are in charge of dinner." Which doesn't really mean much but throwing everything I have ready into a crock pot. So my first card this morning kind of evolved over the course of several days. I think I make better cards if I really think things through although this one I changed several things on the fly. 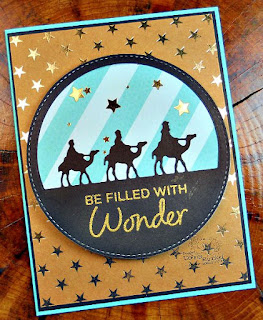 I knew I wanted to use this die from Gina Marie Designs called Three Wise Men (Kings in my book, LOL!) I used this same die for my FIL's Christmas cards that I posted about earlier. And I wanted to come up with a variation for using the die. So instead of making the full panel with the die, I die cut the kings first and then die cut around the kings with MFT Stitched Circle die. The designer paper is from my stash. I cut the striped green paper with the same circle die and glued it to the kings die cut and then used craft foam to pop up the entire circle. The sentiment is from Technique Tuesday called Christ is Born stamp set and embossed with gold embossing powder. I tried to match the card base with the colors behind the kings so it's a teal color with black layering behind the stars. Really like how this one turned out. Originally I had a red card base and a different background paper but this looks so much nicer! I am entering these challenges:
I am so thrilled to have a day to do nothing but craft. It's been ages since I had that luxury and I'm going to take full advantage of it (if nothing crops up during the day). Hope you have an opportunity to craft this weekend too. I already have an idea for my "L" card so I am off and running. Stay safe and God bless!
Donna

Nice, Donna - love that starry paper and the gold emboss! A perfect sentiment with that scene, too! Thanks so much for playing at Sparkles!

Sometimes great cards come out of making things on the fly Donna. I really like this one and think that is the case here.

Ooh! I LOVE this, Donna! Love the wise men die and the star paper!!
This sentiment stamp set has been on my wishlist awhile. Good reminder to go look at it again. :)
Thanks for playing along with us at Sparkles Christmas Challenge!
Debbie
Debbie's Dash of This and That

A day of crafting sounds wonderful Donna, and after all you've been doing lately you definitely deserve it! Your Three Kings card is absolutely beautiful, I really love the gold stars on the patterned paper... very appropriate for the die cut. The bright blue is a wonderful contrast to the orange paper, I love the combo. Great sentiment too!
Cheers,
Beccy

Wonderful christmas card.
Thank you for joining us at the Sweet Stampers and i hope to see you again.
Hugs
Kuni

I hope you had a great day of crafting. I love the shine of the gold in this card. You've really captured it in your photo. That silhouette die is perfect. the striped paper look like rays of light. Lovely.

Beautiful card. Thanks for playing along with us at Crafty Hazelnuts Christmas.

What a lovely background for this great silhouette - thanks for showing a big part of the original Christmas story. I saw this on Beccy's blog.

Thanks for joining us at Christmas Crafts All Year Round.