Hello! Watching and praying for all those on the east coast who may be affected by Hurricane Dorian. I've been working on a card for a 50th wedding anniversary for some dear friends of ours. Here's what I came up with. 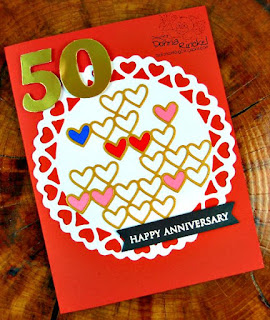 I used the Spellbinder's Contemporary Hearts Pendant on the red card stock card. I used the Simon Says Heart Stack inside the pendant. I filled in some of the hearts to represent my friends' family. So the two red hearts are the 50th wedding couple. They had a son and daughter represented by the blue and pink hearts at the top. The three pink hearts at the bottom represent their 3 granddaughters (2 from the son and 1 from the daughter). I added the 50 die cuts at the top and added the Happy Anniversary sentiment from a Hero Arts stamp set. I heat embossed it with white embossing powder on black card stock. And here is the inside. 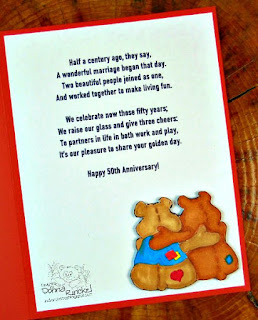 The image is from QKR Stampede called Bear Hugs. I colored them with Spectrum Noir markers. I added a verse for the inside.
I am entering these challenges:


I won't be around much for the rest of the month. My brother passed away this past week and the funeral will be Tuesday. We were scheduled to leave on vacation on Tuesday so that's being pushed back. We are heading for Maine for several weeks and we won't have Internet most of the time. So I'll have at least one post that will be scheduled but the rest of the month may not be much posting. I'll be back in October. Have a wonderful month!

fabulous card. hope all is well. i haven't been getting any of your posts lately. geeze! anyway, all is good here. loving this cool weather. be well.

Great card, I love that you decorated the inside too!
Thank you for joining the fun at QKR Stampede this week (& for using a QKR image) & good luck!
Hugs
Dawn (QKR DT)xx

I bet they will love it!

Wonderful card for your friends, love that the hearts represent their family!!!

I am so sorry to hear of the loss of your brother : ( Big Hugs!

Aah, this is such a darling card, love the inside sentiment and the wonderful bear hugs image.

So sorry you lost your brother, that is a hard one to bear, glad you have a vacation right after as it will help take your mind off your loss. Big, big hugs.
Glenda

Such a sweet card to celebrate a special anniversary!

Thank you so much for entering our ATG challenge at Through The Craft Room Door this week. Looking forward to seeing you again next challenge.
Regards,
Rijacki

Beautiful way to celebrate an anniversary! I'm sure they will adore it! Thanks for joining our weekly challenge at QKR Stampede!