Many of you knew and were praying for my daughter and son-in-law and the baby that they were expecting in February. Last night, Tricia's water broke unexpectedly and she was rushed to the hospital. The LifeLine helicopter came down from Indianapolis to fly her to another hospital but little Alexander had other ideas. He was born at Bloomington Hospital shortly after the helicopter arrived. They called a second helicopter with a pediatric team on board for Alex. Alex made his arrival at 9:39 p.m. weighing in at 3 lbs and 6oz. and 16 1/2 inches long. But unfortunately he didn't have a left lung and his right lung wasn't strong enough to sustain him. After a valiant effort on his part and the part of the pediatric team, Alex went to heaven at 1:37 a.m. this morning. I had hoped that I wouldn't have to make this card, but here is my card for Alex. 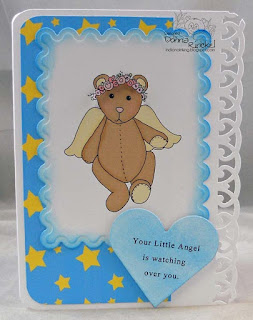 I was trying to find a little boy angel and I didn't have one. This bear angel looks very similar to the bear they gave Alex at the hospital so I used this Dearie Dolls image for Alex's card. I couldn't get a very good photo of the card. Behind the scalloped border is more of the star designer paper from DeeDee's Digis from the Wish Big stamp set. I used Spellbinder's Scalloped Rectangles to die cut the image and then inked the edges with Salty Ocean distress ink. The sentiment is computer generated and cut with Spellbinder's Heart die.
No challenges tonight. This one is for Alex alone. Rest in peace our little angel.

My thoughts and prayers are with you and your family, Donna. God bless this little man...he came to be an angel.

Oh Donna, my thoughts and prayers go out to you, your family, and dear little Alex. Hugs dear sistah.

Donna you and your family are all in our prayers, I'm so sorry for your loss, may God bless all of you and ease your pain as he welcomes in his new little angel Alex.
Hugs, Lori m

Oh Donna, my heart is breaking for you. Your precious little Alex is now an angel in the arms of Jesus. You and your family are in my prayers.
Pam
scrap-n-sewgranny.blogspot.com

Donna, I am heartbroken for you & your sweet family to read this. And what a lovely & perfect card for Alex. God needed another angel, and He was good enough to let ya'll love him for a while on earth, but then Alex was needed back in Heaven. I know that doesn't ease the pain, but Alex is safe in God's Arms...where all will be well for him. No struggles or strife. God keep all of you, in His comforting care. Big hugs, and TFS the card, and just a little bit of Alex's story with us.

Thoughts and prayers to you and your family. So sorry for your loss.

Donna, My prayers are with you and love your beautiful card. Hope you have some good new by now.
Hugs Pat

o donna.... i am so very very sorry! but on a brighter note... GOD IS GOOD and there are bigger and better things coming for the young couple. you are all in my prayers and my heart. may you still enjoy the blessings of thanksgiving!

Donna I am so sorry for their and your loss. My prayers go out to you and the family and the sweet little angel in heaven. Your card is perfect.
Hugs!!!!

my heart is crying for you my friend, so very sorry for you loss
hugs, Valerie

So sorry for your loss and for the kids too. What a sad life event for you all. A beautiful card and a very sweet image. Will keep you all in prayers!