Happy Sunday! I hope it's as bright and cheery where you are as it is here. The sun is hot though and I am opting for the air conditioning for the moment. Our weekend didn't quite go as planned. I had not planned to be home this early. We had an inch of rain Thursday evening into Friday morning so we had to cancel the gravel we were supposed to get for the driveway. So sadly, our driveway is still not finished but we'll try again next Friday and with fingers crossed the rain won't come again on Thursday evening. Tom was afraid the heavy trucks would rut the new driveway with that much rain. So instead of working on the driveway, we cut down a tree that had broken off and was hanging. I did take some pictures of that huge tree. I will post those a little later.
I have two cards this afternoon. I had  a blast making them mostly while it rained. What better way to pass the time. 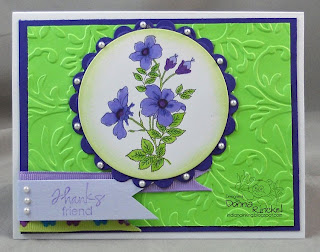 The image in this card is from Floppy Latte Designs. I colored the image with Copic markers and used Spellbinders large circles to cut out the image. I backed the image with Spellbinders Scalloped Circles and then added pearls along the edge. The green background is embossed with the Victoria embossing folder. Then I added two ribbons and one piece of cardstock stamped with a sentiment. I added three pearls on the edge of the cardstock.
I am entering these challenges:
And my second card: 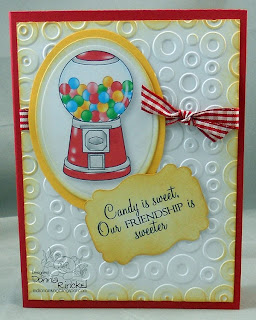 So this card was really fun! At Clearly iStamp, the challenge was to lift the person before you. So the person before me was Debi at That Might Look Good on a Card. And this is the card I decided case from Debi. 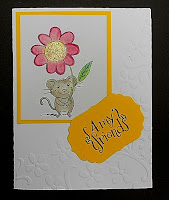 I didn't quite have the border embossing folder so I used a full embossing folder. The image and sentiment are from Clearly Digi Stamps called Sweet Stuff. I used the pre-colored image from the set but there are outlined images also. I just love the sentiment. The embossing folder is called Spots and Dots. I used a crap of ribbon to give the card a bit of embellishment and the image is popped up to accommodate the ribbon. I also inked the edges with So Saffron. I was trying to keep the yellow theme that Debi had but wanted to give it a bit more definition. Besdies entering the Clearly iStampchallenge I am also entering:
Well, that's it for today maybe. I am hoping to get some more play time in today. Thanks for stopping by and spending some time with me. Hope you have a wonderful Sunday!

Beautiful card, thanks for joining us at Cutie Pie's. Sue x

Beautiful cards, Donna! Love the lovely flower which you brought to life with your coloring. And the gumball machine is so fun! Gosh what a great card and a terrific case. The colors go perfectly with the image.

Lovely Lifting - thanks for joining us at Cleary iStamp for the lifting challenge - enjoy your week! Gail DT

Beautiful cards! I love all the texture and colouring you have done. Thanks for joining us this week at Try Stampin' On Tuesday.

Love the card you lifted and your interpretation of it! The circle embossed background is perfect with the bubblegum machine! SO glad you played with us at Clearly iStamp!
{hugs}
Debbie

making cards is way better than laying a driveway - LOL. fabulous cards! love the gumball one.

i had to turn the air back on -- too humid. hopefully tomorrow (tues.) i can turn it off. would be nice!

Love both cards! Great job "lifting" too! Thanks for entering the ClearlyiStamp "lift the person before you" Challenge! Debbie McNamee CiSCDT

Two great cards with wonderful copic coloring. What a cool idea to "lift" the person before you. I've always love the colors of gumballs in a machine. I have two machines but I put M&M's inside since I don't chew gum...haha

Beautiful cards! Love the gumball machine image! Thank you for joining us at Party Time Tuesdays. Hope to see you next week.

Wonderful embossing on these two fabulous cards, the blue flowers are so lovely and the gumball is so much fun.
hugs
Glenda

Beautifully crafted. Great design and attention to detail. Thanks for sharing your talent with us at Delightful Challenges. We look forward to seeing you again.
Hugs
Berni, DT
delightfulsketches.

That gumball card is gorgeous!! I love your bright colors and that "sweet" sentiment. : ) Also really like that embossing folder you used. Thanks for playing in the Clearly iStamp Challenge.

I love the way you 'lifted' my card! Great job!

This is a great lift! I love the gumball machine and sentiment from CDS that you used! Yay! :) It goes perfect with your embossing folder! Thank you so much for joining us at Clearly iStamp! Hugs!-Katy DT :)

A beautiful card. Thank you for joining with us at Creative Craft Challenge. Marlene DT