Can you believe it? We are saying good-bye to another year. Where did this year go. Time seems to be marching by so fast. I hope you are looking to 2013 as much as I am. We are hoping for a healthier year since Tom and I both had surgery this past year. I am looking for more time to craft for Operation Write Home. I started sending them cards in August of 2012 and if I have a resolution this year I think it will be to increase the amount of cards I make for them. Because of the impending postal increase coming up at the end of January, OWH is having a challenge. 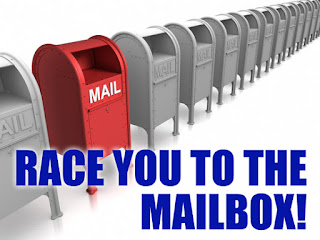 heck out all the details about the Race to the Mailbox challenge. Mail your cards before the postal increase on January 27th and follow the OWH instructions and you'll have a chance to win one of 5 goodie boxes filled with craft supplies. New goodies to start out the new year!

Now I did a card for today but it's not for OWH. My son Dan visited for the holidays but has returned home to Boston. We share a love for football and especially the Colts. They won yesterday with a wonderful game against the Houston Texans so I mad him a card to say thanks for visiting and "Go Colts!" in the playoffs. 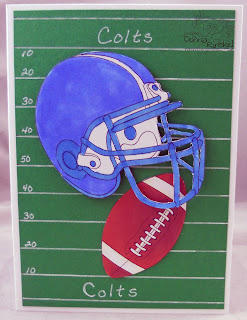 The image is from Doodle Pantry called Football and Helmets Color Plus. I used the color version of the football but the outline of the helmet and colored it Colts blue. My background is a piece of green card stock that I used a white gel pen to draw the lines for the yards and added the Colts names in the end zones. The helmet is colored with Copic Markers.

I am entering these challenges:

I want to wish you a safe and Happy end to 2012 and beginning to 2013. Don't forget that Doodle Pantry is having a 50% off everything except gift certificates today only (December 31st). That includes all the new January releases which we will showcase tomorrow. See you then!

Love the card Donna! I'm going to have to check out that challenge! Happy New Year to you and your hubby! May it be a year free from surgery! :)