Every 15th of the month, I post a card made from a kit that is sent by one of the Dueling Darlings on Splitcoast Stampers. You can see the first card from the kit in this post. That post also lists all the contents of the kit. There is always so much fun stuff that comes in these kits and you can often make two or three cards and still have leftovers. I didn't get a chance to make a second card for the original post, so tonight I made a second card with the kit. 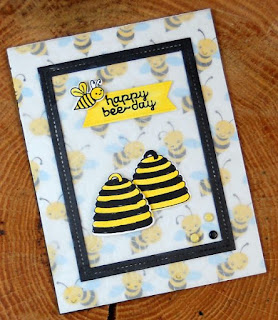 For this card I used another of the sentiments that Terry sent and die cut it with MFT Pierced Fishtail Flags die. The bee designer paper is so cute but what you can't see in the picture is the vellum layer that's embossed with little honeycomb shapes. It really adorable! I found this stitched frame that I had leftover from another project on my desk so I used a black marker to make it black. I added brads from the kit in the bottom right corner of the frame. It's hard to see the two yellow brads but the black brad shows up well. There were originally three yellow brads in the kit but I lost one on my desk so I added a black one from my stash. I added one of the bees to the sentiment. One of the hives and the bee is popped up from the card. I really like this one. Terry sent an awesome kit! Thanks again, Terry! I am entering these challenges:


We finally heard from the computer place today. My computer is infected with malware. Hopefully I will get it back by Friday. Tom went away this evening so I was able to use his computer for a little while. Thanks for stopping by. Hope you are having a great week.

Labels: My Favorite Things, Stampin' Up!

So fun that you were able to create a 2nd card! LOVE it : ) What a fun design.

I bee-lieve this card is a cute one!

love how you used the velum over the bee DP, and how you colored the sentiment! Great card!


Beautiful card!Thanks for sharing with us at Cupcake Inspirations! Good luck!
Hags,Danijela

Super cute!!! Thank you for joining us at Craftaholics, good luck!!! Amy DT

Such a cute card! So glad you joined us at the Craftaholics R Us Challenge this week! You can follow me at http://afourthlife.blogspot.com kReN

Wonderful card Donna! The little bees are super cute and the design is fabulous.
Thanks for joining us at Simon Says Stamp Wednesday Challenge
Mandy xx

This is so cute! Love the bumblebees! Thanks for sharing with us at Cupcake Inspirations!
Hugs,
Debbie

Such a fun layout. Super cute!